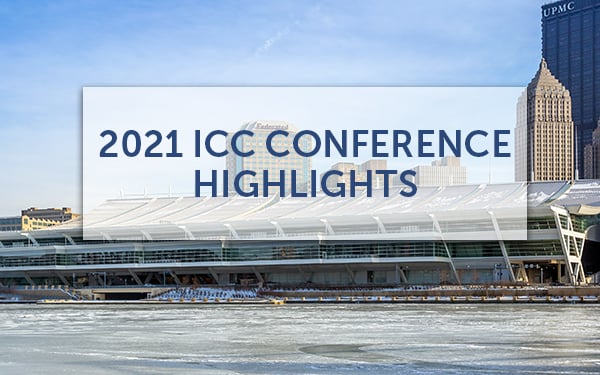 SAFEbuilt is excited to be back attending in-person events giving us the opportunity to connect with so many talented industry professionals across the country. Last week several members of our team attended the International Code Council (ICC)’s Annual Conference in Pittsburg, PA.

During the annual business meeting, ICC’s Chief Executive Officer Dominic Sims shared an update celebrating the resiliency and adaptability shown throughout the building safety industry and highlighting the importance of digitization in the future.  “The world has faced major challenges in the past year that have drastically impacted the ways in which we live and work. But the building safety industry has remained steadfast during these tough circumstances,” Sims remarked, “The obstacles we’ve faced this year have also confirmed the immense value of digitization. The investments our members have made to improve their virtual capabilities have helped to mitigate delays, keep the economy afloat and produce lasting reductions in operational costs.”

Left: David Spencer being sworn in as a Director at Large for his second three-year team Right: Paul Featherston and Renee' Snodgrass begins sworn in as President and First Vice President for Region V

As part of the conference, the Code Council welcomed the new members of the Board of Directors, which includes four officers, eight at-large directors and six sectional directors. David Spencer, SAFEbuit’s Washington State Operations Manager was re-elected as an at-large director for his second three-year term. Leveraging his thirty plus years of experience in the built environment, David continues to be a great asset to both the ICC and SAFEbuilt. More information about David and the other board members can be found here.  Additional members of the SAFEbuilt Operations team accepted leadership roles on a regional level. Paul Featherston, Michigan State Operations Manager, was sworn in as President of ICC Region V, and Renee Snodgrass, Building Official in Ohio, became Region V’s First Vice President.

Another significant part of the week is the Board Shadow Program. Board shadows are selected from the Emerging Leaders Membership Council, a program designed to help accelerate motivated young professionals on a path to future leadership. Jacinda Cheatham, Building Administration Administrator in Ohio for SAFEbuilt, was among the fifteen shadows selected this year. Jacinda and the team of shadows present at the event attended the Board Dinner, a public portion of the Board Meeting, the President’s Reception, and the Annual Business Meeting. “This was my first ICC conference. I learned more about ICC as a company, how the conference operates, what goes in to changing our future codes, how the ICC interacts with other organizations to provide codes around the globe and how each member of the board brings their experiences to provide a better and safer world for tomorrow,” Jacinda reflects on her experience, “I loved the opportunity to network with the ICC Board of Directors and CEO and learn from their experiences. Understanding the role they play in the direction of future codes has inspired me to take a greater part in our industry and its future.”